Cyprus – the ideal place for a spot of winter sun! 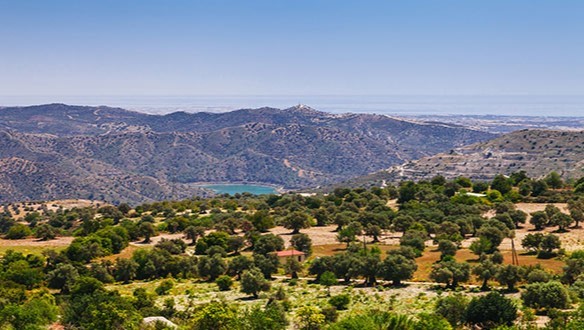 Cyprus enjoys plenty of sunshine all year round, so is a great place to visit in the winter months, with the added benefit of no crowds! October and November are ideal, the heat of the summer sun has gone, however there are plenty of sunbathing opportunities still to be had, and the temperature is very pleasant for getting out and about and seeing the island and there is lots to see.

Many of the hotels are clustered around Paphos and Limassol and these resorts are certainly where the action is. However, there are quieter resort options and a hidden gem well worth considering is Pissouri beach. The beach area has developed since the beginning of the 1980s from a jetty and one small taverna, into what it is today - an informal collection of excellent tavernas, a few shops, two banks, holiday apartments and one hotel. The resort has retained a Cypriot atmosphere and it is here that Cypriots come on Sundays to mingle with the visitors enjoying the beach and the bay. The beach is clean, safe, partly sandy and partly shingle, the sea is calm and excellent for swimming and there are water sports available in the summer.

The famous Aphrodite's Rock is about three miles to the west of Pissouri.

If you are into exploring ancient ruins you will be spoilt for choice in Cyprus.  The famous ‘Tombs of the Kings’ form part of the Archaeological Park of Kato Pafos, one of the most important archaeological sites of Cyprus that has been included in the UNESCO World Heritage Sites list since 1980. The monumental underground tombs are carved out of solid rock and date back to the Hellenistic and Roman periods. Rather than kings, it is actually high ranking officials and aristocracy that were buried here, but the size and splendour of the tombs, some decorated with Doric pillars, give the locality its grand name and it is well worth a visit, allow a morning or afternoon to really do it justice. In the height of summer it will be incredibly hot so definitely one to save for a spring or autumn visit to Cyprus.

Not too far from Paphos is the Kourion archaeological site which includes some very impressive mosaic floors. The ‘House of Eustolios’, a modest sized private villa, it’s remains consist of four panels of beautiful, 5th century mosaic floors in the central room, and a bathing complex that is located on a higher level. A roof structure allows visitors to enjoy the site all year round, and explore its remnants. Along with the House of Eustolios, there are further impressive mosaic floors in the ‘House of Achilles’ and the ‘House of the Gladiators’, with the villas named after the scenes depicted on the mosaics. The Kourion site also provides visitors with excellent views along the coast and out to sea.

Did you know Cyprus is famous for wine? There is a selection of wine routes to choose from, a great way to enjoy the beautiful rural countryside, and driving is very easy in Cyprus as they drive on the left. One such route includes Kolossi castle, originally built in the 13th century, and rebuilt in its present form in the 15th century. After the fall of Acre in 1291, it served as the Grand Commandery of the Knights of the Order of St. John of Jerusalem, and in the 14th century came under the domain of the Knights Templar. During their stay in Cyprus, the Knights produced and exported a sweet wine, which became known as the ‘vin de Commanderie’. Today, Commandaria wine is one of the island’s traditional wines and one of the oldest named wines in the world, having had the same name for eight centuries. It is like a dessert wine and is generally served chilled.

It is also worth heading into the Troodos Mountains, in summertime they are an escape into the cool heart of the island. The high village of Platres resembles an amphitheatre, with the lower part of the village having one altitude and the upper part having another, thus separating it into Pano (upper) and Kato (lower) Platres. It is a popular holiday destination and offers accommodation in quaint hotels. Aside from the nature trails, Platres has one of the highest waterfalls in Cyprus, Caledonia, believed to be named by English or Scottish visitors to the area in 1878. The village is also filled with charming old buildings, and has a winery in Kato Platres.

Dotted all over the Troodos are painted churches, many of them UNESCO World Heritage Sites. On the outside they are not especially striking, not at all like the domed cathedrals you see on the coast or in Greece. With their wattle-and-daub walls and pitched roofs, they look more like barns or byres than churches or chapels. The wonder only becomes apparent once you get inside, for every inch is covered with paintings: icons of haloed saints and saintly kings, scenes from the lives and deaths of stoical martyrs, tales of Jesus presented as a kind of pious comic book for the unlettered. Be sure to stop and look at a few as you are driving round.

Cyprus has so much to see and do it is well worth considering visiting outside of the hot summer months to discover all this Mediterranean island has to offer.

Here are some more winter sun options for consideration:

Beaches in the Cape Verde Islands, for more of a fly-and-flop break, these islands are just the place to be.

How about walking in La Palma? For dramatic volcanic landscape combined with pine woods and banana groves, it’s hard to beat the National Park of Caldera de Taburiente located in the lesser-known Canary island of La Palma.

Cycling in the Atlas Mountains, an expanding network of quiet tarmac roads means that it’s becoming increasingly easy to explore this spectacular region of Morocco by bike.

Villa in Lanzarote, a reliably warm climate, and plenty of good quality family accommodation available, there are very few destinations which can match Lanzarote during the winter months.

Antiguan hillside hideaway, February is peak season in the Caribbean, so make sure you book flights sooner rather than later. Easter prices are similar and airfares may be slightly cheaper.

Boutique hotel stay in Seville, few European cities enjoy a winter climate as warm and sunny as Seville. Fewer still have such fascinating historic sights’, such a lively contemporary culture and such delicious cuisine.

Whatever takes your fancy for your winter sun getaway, contact us today and we’ll get you booked!